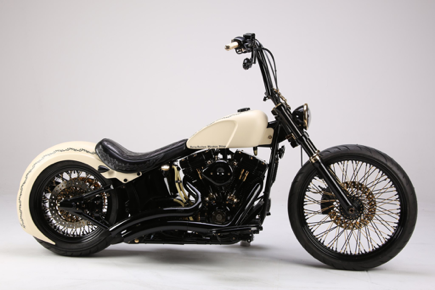 Known as the ‘White Unique’, the machine was created at the suggestion of Dr Thomas Draxler, founder of the ‘Jesus Bikers’ group in Austria, as a fundraising vehicle, to be donated to the Pontifical Mission Societies (Missio), the official support for Catholic overseas missions.

Bavarian-based Harley Davidson dealer, Würzburg Village, supplied the motorcycle and collaborated with the Jesus Bikers on its customisation. As the name suggests, the machine is finished in pearlescent white, with Chicano (Mexican American) style detailing, numerous gold-plated components, a Dorne wreath ornament, a sunken cross and Pope Francis’ signature on the tank.

The Harley Davidson was unveiled to the public in Würzburg on 29 June 2019 before being accompanied by the Jesus Bikers to the Vatican, via Assisi, where the ‘Pope Bike’ was handed over to the Vatican at a ceremony with His Holiness in St Peter’s Square on 7 July. 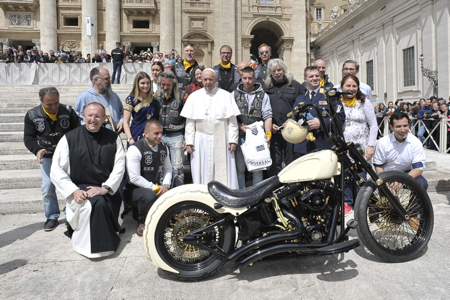 The ‘Pope Bike’ being presented to His Holiness, Pope Frances’ in Rome
© Photo Vatikan & Jesus Biker

The motorcycle is the latest in a short succession of motorcycles and cars that have been donated to the Papacy and sold on for charity, including the 2013 Harley-Davidson FXDC sold at Bonhams 2014 Paris Sale for €241,500. In this case, the proceeds are to benefit a mission to build an orphanage and a school in Uganda to provide shelter for abandoned and deprived children

James Stensel, Head of Bonhams Collectors’ Motorcycles UK, said: “We are incredibly proud to be entrusted with the sale of this unique motorcycle, set to benefit such an important cause. It’s fitting that a Harley-Davidson motorcycle, (mobilising people around the world for more than 115 years), should bring so many like-minded people together. This incredible machine would be a worthy addition to any collection, while raising a substantial amount for a very worthy cause.”

The Autumn Stafford Sale takes place alongside The Classic Motorcycle Mechanics Show, over two days, starting with lot 1 at 12.00 on 19 October and at 11.00 with lot 301 on 20 October.