WITH an impressive total sale rate of 92% and a total of £3,892,397 achieved, the Bonhams auction at the 39th Carole Nash International Classic MotorCycle Show on April 27-28 resulted in an all-time record sale. 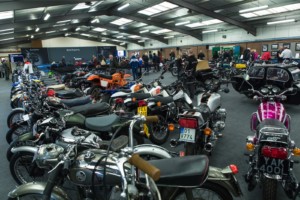 Highlights included a 1962 Triumph 649cc TR6SS which had been ridden by Bud Ekins, the American bike racer who performed the famous jump as stunt-double for Steve McQueen in The Great Escape. The lot achieved more than three times its top estimate with a world record auction price of £97,750.

Another record-breaker at the show was a 1925 Coventry Eagle 981cc Flying-8, a rare example of a vintage overhead valve V-twin, which set a new auction record for the marque, achieving an impressive £218,500. After a three-way bidding battle, the machine was bought by a lady bidder in the room at the 39th Carole Nash International Classic MotorCycle Show and will join a renowned collection.

A third world record was set for a 1935 Vincent-HRD 498cc Series-A Comet which sold for £97,750 to a bidder in the room. This rare Series-A, one of only a few ‘intermediate sump’ types, was totally restored in 2015 by famed Vincent-HRD restorer Glyn Johnson and has been on display ever since.

James Stensel, head of Bonhams Collectors’ Motorcycles, said: “What an incredible weekend! We are thrilled with the results of this sale, not only breaking our own auction record but also achieving three world auction records for individual marques and models.

“This sale, our largest to date, with over 400 collectors’ motorcycles offered, proves that machines with fantastic history, originality and pedigree will always achieve record prices.”

Excitement outside of the auction room continued throughout the halls, with an impressive line-up of famous TT racers including Ian Hutchinson, Tom and Ben Birchall and Steve Plater talking about all things Isle of Man racing, the road to success and, in Hutchy’s case, the incredible road to recovery. 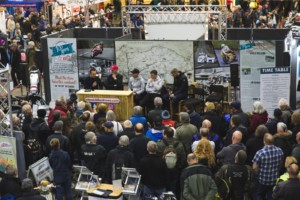 Visitors were entertained with live chats from guests of honour of all eras of TT racing, including nine-time winner Charlie Williams, three-time winner Alex George and six-time winner Jim Redman plus the man who beat Agostini – John Cooper – and fans’ favourite Tommy Robb. On display behind them was an incredible collection of nine ex-TT machines, including the Birchalls’ world-champion winning sidecar outfit. 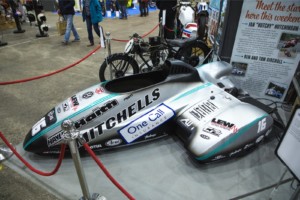 In order to give back to the Isle of Man TT, show organisers raised just over £518 to donate to the TT Riders’ Association by selling commemorative posters to visitors for signing opportunities with the star guests. Mortons Media Group associate director and former TTRA president Malc Wheeler said: “I am over the moon with the generosity of people at the show. Every penny raised will go to help an injured TT rider or a former rider that needs assistance.”

Organisers are already putting plans in place for the 2020 show which celebrates the 40th year of this fantastic event. For more information coming soon, please see www.staffordclassicbikeshows.com or follow @classicbikeshows on Facebook, Twitter and Instagram.