The two-day sale will represent the A-Z of motorcycling, offering more than 100 individual marques and 200 lots of motorcycle spares and associated memorabilia, reflecting the strength of the classic motorcycle market. 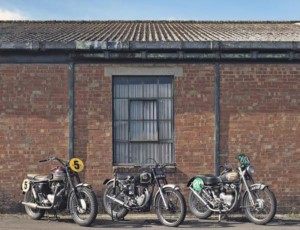 Bonhams is the auction house of choice for the sale of important single-owner collections and the Spring Stafford Sale includes four key collections:

The Sant Hilari Collection (Lots 202 – 307) – Over 100 important MX and Enduro motorcycles, to be offered entirely Without Reserve;

The late Mike Taylour Collection (Lots 331 – 348) – one of the world’s foremost collectors of ‘Black Ariels’.

Highlights of the R. J. Gardiner Collection include:

Triumph 649cc TR6SS Trophy ridden by American Bud Ekins to win a Gold Medal in that year’s ISDT (authenticated by Bud and offered with a framed 1962 ISDT poster and the cup awarded to him for his individual class win). A consummate off-road racer, bike restorer, occasional stunt rider, and all-American hero, Ekins was a close friend of actor Steve McQueen and performed the famous motorcycle jump (as McQueen’s stunt double) in the movie The Great Escape. Estimate £20,000 – 30,000.

In addition to the countless off-road competition machines, the sale includes notable track racing motorcycles such as the 1928 OK Supreme 250cc racing motorcycle (estimate £50,000 – 60,000), widely accepted as that ridden by Frank Longman to win the 1928 Isle of Man Lightweight TT, the only TT victory achieved by this British manufacturer. 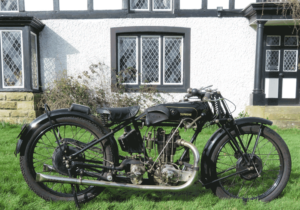 Among the road-bike exotica is an example of the earliest and most collectible ‘sand-cast’ version of Honda’s seminal CB750 (estimate £24,000 – 28,000). Launched at the 1968 Tokyo Show, the first examples had sand-cast crankcases, whereas all subsequent variants had die-cast cases. Dating from 1969, this example is offered from a prominent UK private collection.

James Stensel (Head of Collectors Motorcycles, UK) said: “The Stafford sales have grown exponentially in recent years demonstrating the continuing popularity of classic motorcycles around the globe. The Bonhams motorcycle team has carefully sourced over 400 incredible machines, making for another truly memorable auction.

We look forward to welcoming clients both new and old to Europe’s largest and longest standing motorcycle auction at the International Classic MotorCycle Show”.

Sunday 28 April from 9am

Contact our Bids team to pre-register for this landmark auction.