As well as the many incredible bikes and superb club stands to see, if you would like a laugh come to see the Classic Bike Guide team attempting to build their classic race-bike, live on the Mortons magazine subscriptions stand in the Main Hall. A humble 1971 Honda CL350, left neglected and seized since 1976 in an American barn, is hopefully going to be transformed into a competitive race bike for classic race series with the CRMC and BHR clubs in the UK, as well as some road-racing in Belgium.

This is no factory-supported effort though; the idea is to see if anyone can build a bike that is competitive enough, yet without spending the children’s inheritance. Begging, borrowing and occasionally stealing may occur…

The CL350 is a scrambler-styled variant of the CB350, which was only imported to the USA. The main differences to the CB that we got in the UK are a different tank, forks, bars, wheel sizes and some rather attractive, but more restrictive high-level exhaust pipes.  The 325cc four-stroke parallel-twin, with its five-speed gearbox, is the same.

In racing, these bikes are often called the K4; due to the fact the fourth incarnation had a disc brake at the front rather than a drum, allowing it better brakes for racing.

In today’s series, you are allowed to run several lighter, stronger frames like the TAB or Drixton frames, but Classic Bike Guide are sticking with the original, albeit strengthened and tweaked. Many racers use the better suspension from the larger 500cc models, but CBG are going to have to see what’s left in the coffers. Any advice would be gratefully received – or just come and wish them luck!

Subscriptions to Classic Bike Guide are available from the Main Stand in the Main Hall – in front of the private entry display. Make sure you head over and chat to one of the team to find out the latest offers! 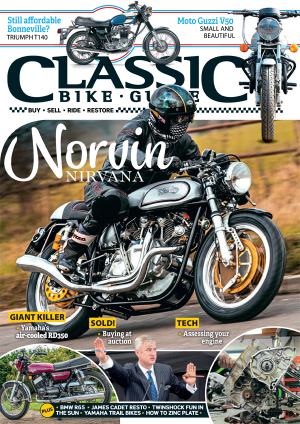